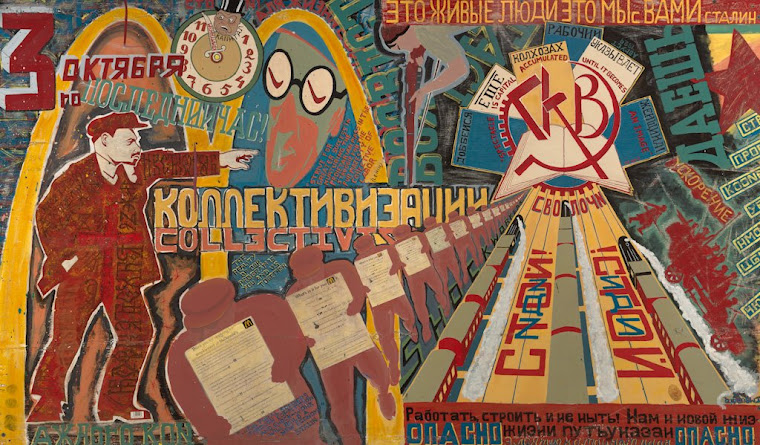 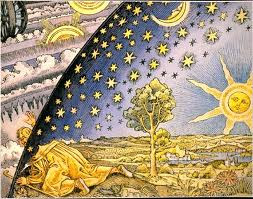 My friend Dan Oudshoorn over at On Journeying With Those In Exile <http://poserorprophet.wordpress.com/> has asked me and some other folks to share a guest post on his blog. I appreciated the offer but I often have a hard time self-starting on anything longer than a FB comment (that’s why there are only 6 or 7 posts on this blog in 3 years; and really, FB wisecracks and sarcastic blog comments should not suggest one be given the responsibility and honor of a whole post on my favorite and a highly esteemed blog). However, I asked Dan to pose me some questions an I would see if anything came to me, this is what he sent me:

(2) What is the significance of meaning?

(3) What is the relationship of meaning to ethics?

(4) What is the relationship of meaning to events?

(5) What is the relationship of meaning to actions?

(6) What is the relationship of meaning to desire?

(7) What is the relationship of meaning to language?

(8) What is the relationship of meaning to being?

(9) What is the relationship of one person's sense of meaning to other senses of meaning?

(10) What is the relationship of meaning to meaninglessness?

Of course, this freaked me out, and is a good example of what happens when you shoot your mouth off a lot on other folks blogs with pseudo-intellectual pretentiousness and didactic pontificating (along with large forkful’s of quasi-B.S.). Still I am accepting DanO’s challenge and I am working diligently on my response. Bear in mind, I have never actually posed myself as anything other than a mediocre Hillbilly-folk singer; and since all my friends and family are on FB and read this blog, they can keep in check any tendency I have towards self-aggrandizement and exaggeration--especially my wife!

Now while I am working on my response I asked DanO to answer a question for me as well, and he accepted. I have great respect for DanO’s writing, insights, scholarship, intellectual heft and experience living and working in places of homelessness and suffering (see his blog for bio). So, since DanO and others have been writing a lot lately on the experience of “godforsakeness” and the larger questions of God’s presence (or absence, indifference, of disappearance) in the terrible places of suffering, despair and death in this world my question was: “What is your experience and understanding of the Jewish concept of TziTzum?” “TzimTzum” you may have noticed is the name of this blog. Below is DanO’s excellent reply:

In response to the relatively simple and playful questions that I asked you, you responded with one that is more serious and difficult to answer. You asked about my “experience and understanding of the Jewish concept of Tzim Tzum.” I will reverse the order of your question to speak of my “understanding” of the concept and then will turn to the question of my “experience” thereof (although, it should be noted at the outset that any “understanding” I have is questionable based upon the limitations of my experience).

I am only familiar with the concept of Tzim Tzum through the writings of a Christian theologian, Jurgen Moltmann, who employs the idea extensively in his book, God In Creation. It has been some time since I read that book, but I remember that Moltmann did engage the Jewish sources in some detail. Thus, the notion of Tzim Tzum, according to (my memory of) Moltmann, is one that seeks to explain how there can be that-which-is-not-God when God is all-encompassing. The explanation is that God withdraws into God's self in order to create a space that is free for the development of that-which-is-not-God. Perhaps a womb would be a good analogy. A space exists, within a given woman, for the development of that-which-is-not-the-woman. That which develops in that space within the woman is not the woman, but it still develops within the woman. So is creation unto God, from this perspective.

This then, leads Moltmann to two or three points that are important to his theology. First, it leads to his development of the notion of panentheism – not that all things are God(s), but that all things are in God. Secondly, Tzim Tzum then develops a different perspective on the experience of exile – didn't some Rabbis relate Tzim Tzum to exile (I don't remember)? Basically, the point is that God has been withdrawing into an exile of God's own, from the moment of creation onwards, and so God's people, who experience exile, can also meet with the exiled God there. Hence, one finds God with the godforsaken in their experience of godforsakenness. Third, and moving into explicitly Christian content, Moltmann uses this concept to support his perspective on kenosis and the sufferings of God, in that God's choice to limit God's self, and God's choice to do so on behalf of creation, is revealed to be rooted in the character of God from the origins of the universe. Jesus, then, according to Moltmann, is simply revealing what God has done and been doing from the beginning of time/space.

So much for my understanding of things. I don't know how much of what I know is true of the Jewish sources or has been added on by Moltmann – other than the obvious addition of Jesus to the mix. The harder question is how I have experienced Tzim Tzum (how does one “experience” a “concept”?).

Half a dozen years ago, when I first really began to explore notions of godforsakenness, exile and suffering not only conceptually but by moving into spaces that appeared to be marked by those things, I found encouragement in this way of thinking. It helped motivate that course of action. Being inspired by a narrative that spoke of a God who journeyed into places of godforsakenness – a God who went into exile, who suffered alongside of creation, a Spirit who groaned, a Messiah who was crucified – I also sought out places that were identified by those things – godforsakenness, suffering, groaning, crucifixion – and thought that I could both help to be a Christ-like presence there while simultaneously finding the presence of Christ there. And, for many years, I found that and, perhaps in some small ways, I was that.

Now I don't know... everything related to meaning, theology, even language, seems to be a game we create and play, in many ways, to get around or away from how events actually feel. Godforsakenness just feels like abandonment. Suffering just hurts. Groaning comes because we have no other words. Crucifixion sucks.

To borrow from Cormac McCarthy's novels – violence simply is. Trauma simply is. Now I don't know any sort of over-coding or narrative that makes sense of those things. Not that I want to discourage others from finding ways to deal with those things by means of meaningful over-codings, narratives, or other ways of making sense. I just have trouble buying into any of it all myself. I want violence to not be. I want trauma to not be. Full stop.

So, Tzim Tzum now seems like a beautiful idea but one that does not connect to the world as it is experienced, not necessarily by me (because I am not as much the focus of my own thinking any more) but by others. If I prioritize the experiences of others whom I have known then Tzim Tzum, or a God in exile, a groaning Spirit and a crucified Christ, doesn't make much of a difference in a meaningful, experiential way.

And that is the place where I find myself. Perhaps still in the womb of God... but who knows if that makes any tangible sort of difference... maybe it makes a difference after we die... maybe... but for now, so what?”

Posted by Daniel Imburgia at 12:42 PM 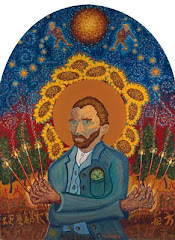 acrylic on panel, 40'X90' used as poster for the "the lost paintings of Vincent" art show. 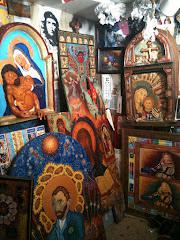 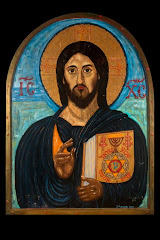 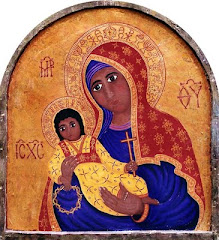 "Madonna of the Corn Fields"

Virgin and Child with Disciples 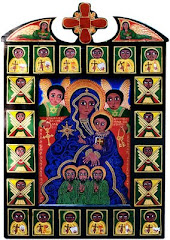 Things I am reading: